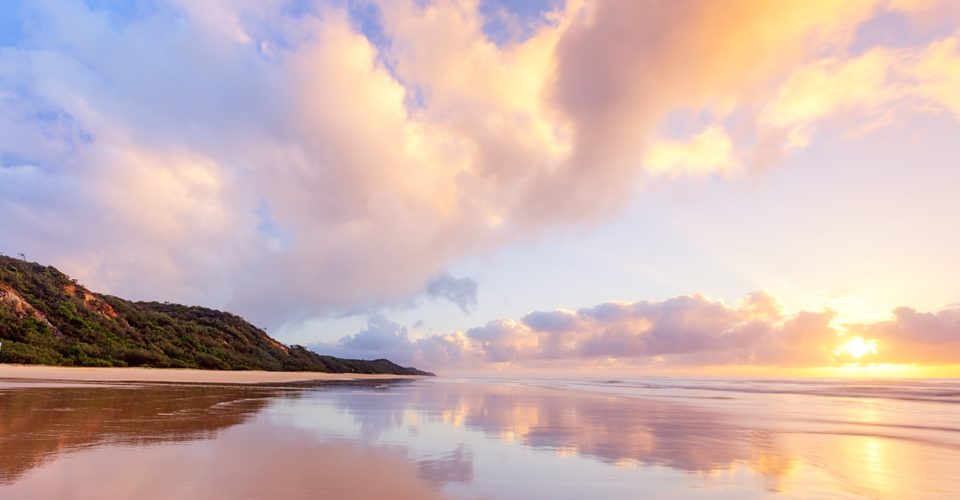 World Heritage Listed Fraser Island is one of the world’s most unusual islands. Not only is it the largest sand island in the world – 123 kilometres long and 22 kilometres wide, but it is the only place on Earth where tall rainforests grow on sand dunes at elevations of more than 200 metres. It also has half the world’s perched lakes, which are lakes formed when depressions in dunes fill permanently with rainwater.

Known as K’gari (meaning paradise) by the traditional owners, the Butchulla people, it is home to the most pure strain of dingoes remaining in eastern Australia. It is also one of the best places to see baby humpback whales and their mothers.

While most of Fraser Island visitors know of its beaches and 4WD tracks, there are a few places that not many regulars are familiar. Below is a list of 12 places on Fraser to tick off your list when you visit it the next time.

1. Lake McKenzie
Lake McKenzie (Boorangoora) is a perched lake and one of the most popular visits for everyone. This rainwater-fed lake is downright beautiful with its mind-blowingly clear water and soft, silica white sand. Many visitors come here to sprawl on the satiny shores and swan about in the crystal clear water.

2. Eli Creek
Eli Creek, like Lake McKenzie is a popular freshwater swimming spot on the east coast of the island. It is deceptively powerful, pouring about four million litres of fresh water into the ocean every hour. A popular past time is to float along with the current on inflatables. There is a boardwalk that follows the water and spots for picnics.

3. Champagne Pools
At the northern end of 75 Mile Beach is one of Australia’s best natural swimming pools. It is named for how the water fizzes as the ocean crashes into the volcanic rock pools. Drive 2.2km north from Indian Head along the beach, walk along the boardwalk and take some stairs to get here. During low tide, the waves coming into the pool are calmer.

4. Lake Boomanjin
At almost 100ha, this is the world’s largest perched lake which is a combination of window and perch. The waters of the lake are stained tea tree red, and the ripples of red are due to very small creeks that carry in water which has been heavily discoloured by tannin from tea trees.

6. Lake Wabby
Lake Wabby is an emerald-green lake at the edge of Hammerstone Sandblow and unlike the other lakes, it supports several varieties of fish. It is known as both a window lake and a barrage lake. One side is bordered by a giant sand dune which is slowly moving into the lake.

7. Sandy Cape Lighthouse
Queensland’s second-oldest heritage listed lighthouse is located on Sandy Cape, the most northern point on Fraser Island which is accessible via a 4.8km return track. Near the beach, a side-track winds through vegetation to a former World War II bunker and you can also find the lighthouse keeper’s grave.

8. Maheno Shipwreck
The Maheno is the most famous of Fraser Island’s wrecks and has become a landmark attraction. This early 20th century steamer was wrecked in a seasonal cyclone back in the thirties. It is a tourist attraction on 75 Mile Beach, just north of Happy Valley.

10. Central Station
Central Station is a popular camping spot in the rainforest and home to the massive Angiopteris ferns, which has the largest fern fronds in the world. It was once the centre of the forestry industry when there was logging on the island but these days you can find a picnic area, a scenic boardwalk and information centre.

11. Indian Head Lookout
Indian Head is one of Fraser Island’s most notable landmarks of its distinctive rocky cliffs. It offers spectacular views of the beach to the north and south, including the opportunity to spot some humpback whales. It is accessible only by 4WD and small walk over loose tracks.

12. Wathumba Creek
Wathumba Creek located on the north western side of Fraser Island is a bucket list destination for many boaters and fishers. It offers gorgeous scenery and isolation from crowds including an overnight anchorage. The camping area is alive with birdlife such as the whistling and brahminy kites, honeyeaters, wood swallows, doves, and finches. Picture courtesy Fishing, Boating, Exploring

Do you need a 4×4 Conversion of Toyota Coaster?

Do you need a 4×4 Conversion of Toyota Granvia?

Do you need a 4×4 Conversion of Hiace?